Polish academia against climate change, and the ECJ returns a verdict

– On June 5th, a district court in Warsaw launched anti-censorship proceedings against Facebook. The case was issued by Maciej Świrski, chairman of the Polish League Against Defamation (altenratively also called the Good Name Redoubt – Polish Anti-Defamation League), a right-wing, nationalistic organization with ties to the ruling Law and Justice party. According to Świrski, Facebook has engaged in preventive censorship, which is prohibited under Polish law. The accusation is based on actions taken by Facebook in 2016 to block right wing organizations and private accounts on Facebook that were displaying nationalistic symbols before Poland’s annual Independence Parade. After the first hearing, the court decided to delay the next session until October 30th.

The Justice Ministry responded to the report on June 15th by filing a lawsuit against the authors and issuing a statement alleging that the analysis contained lies. The authors from the Cracow Institute institute responded with an analysis of the Ministry’s statement, arguing that the government had not only misrepresented their case, but violated the individual rights of the authors as well. Following media pressure, the Justice Ministry dropped the lawsuit, ostensibly because “…the truth is out there, and everyone can form their own opinion”.

–  On June 18th, the Polish Institute in Berlin opened an exhibition called “100 years of Polish comics”. Polish classics like Kajko and Kokosz and Tytus, Romek, and A’Tomek will be displayed in the gallery longside contemporary comic books. There will also be some examples of interwar-era comics such as With Fire and Sword, the adventures of Crazy George.

The exhibition will be held from June 27th till August 27th. . 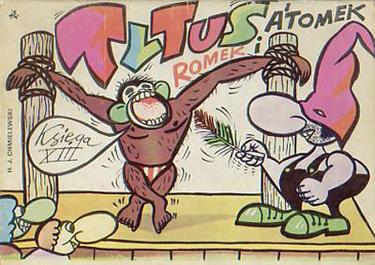 Panel from Tytus, Romek, and A’Tomek

– On June 24th, the European Union Court of Justice ruled that the Law and Justice party reform on lowering the retirement age for Supreme Court judges is against the laws of the EU. Furthermore, the verdict reads that the reform breached “(…) principles of the irremovability of judges and judicial independence”. (Read more in the May edition of What’s Up? Poland )

– On June 26th the Institute of Polish Culture at the University of Warsaw published an open letter urging universities and academic institutions in Poland to implement the provisions set forth by the UN Intergovernmental Panel on Climate Change. The authors’ stated goal was to “set up an interdisciplinary, interinstitutional and national anti-crisis headquarters working on a strategy for action against the climate crisis.”

So far over 500 people have signed the letter, including both professors and students. The letter can be found, and signed, here (in Polish).

Krzysztof Lechowski holds a BA in International Relations and is currently finishing his MA in International Security and Law at University of Southern Denmark. Krzysztof feels passionate about transitional justice in post-communist countries, democracy and sovereignty. He loves to discover new cuisines and meet new people.

lossi36
Lossi 36 is a media project rallying people who are passionate about the post-socialist states of Central and Eastern Europe, Russia and Eurasia.
About Us

New PM sworn in and a month of commemorationsCaucasus, News